As my regular readers will know, my recent focus in this blog has been on my mental health and parenting.

But what of church life?

The sad truth is that the congregations of the churches where my husband in the vicar are dwindling. The rotas and committees and structures are slowly collapsing.

If our churches were tents – this is what they would look like: 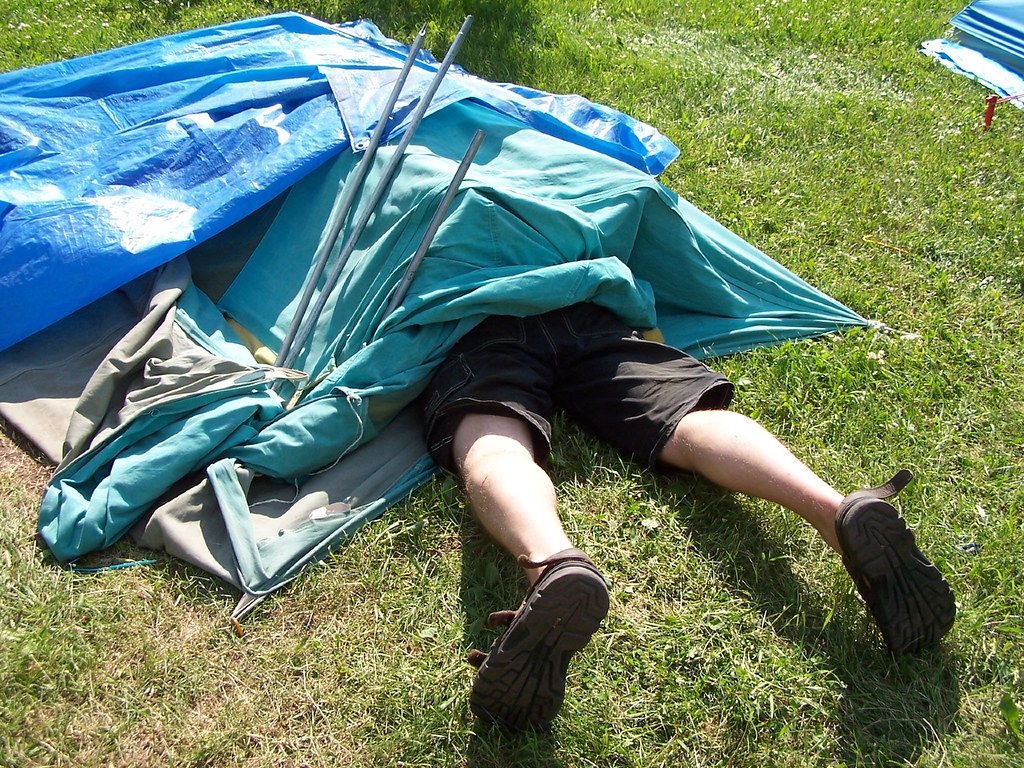 Well of course that’s a huge question with lots of different answers. It is also a question that I care passionately about, that has massive implications for our ministry and our family, but that I have little structural ‘right’ to comment on / have an opinion on amongst those with the power to do anything about it.

Which means I’m going to tell you all about it and then I can at least imagine that someone is listening!

So here’s what I think lies behind (or underneath!) our saggy tent…

The visible church in area has basically lost its central pole – cultural religiosity.

For a very long time this pillar of religion has done a ‘good’ job of holding things up – and an even better job of disguising the spiritual reality – but it is well and truly gone now and we ‘suddenly’ find ourselves standing in a tent being held up by the tallest person’s head.

Why suddenly? Because, whilst the societal norm of going to church twice a Sunday and giving to the church regularly (if not necessarily cheerfully) is long gone, the residual ‘benefits’ of that have lasted much longer. The pole has gone on functioning relatively ‘well’ whilst those residual effects have remained, masking the structural decay going on behind the scenes. For a long time there has been a large and active generation of people who grew up in a strongly religious culture and for whom it was still their norm. In addition their children were still quite heavily influenced by the culture their parents had grown up in – all be it a bit diluted by their own cultural norms. Christmas and Easter, harvest, remembrance, baptisms and confirmations still drew a crowd and filled the coffers and gave us a sense of strength and purpose.  There was still a sense of connection with church (if not commitment and belonging) that kept people giving – if not on a Sunday morning, or in a regular way – at least at the church fund raisers.

But it was just a matter of time. Now we two generations on from that and it is the influence of great-grandparent’s that we are relying on – an influence that is inevitably diluted by the generational gap and which is competing with new cultural norms that are increasingly distant from even the most nominal Christianity. Not only does the average person not have much of a sense of connection to the church, but they are more and more likely to find its teaching and existence at best alien and at worse offensive. Add to that the increasing pressure on everyone’s time and it is a long shot to expect even the sympathetic to show up.

At the same time the stalwarts are struggling – in so many ways. Their numbers, health and strength are diminishing. They are at ‘best’ very discouraged, and at worst increasingly ashamed of the cultural norms they used to cherish and confused as to what they should be holding on to and what they can let go of.

Today it is as though in each of our tents there is an ever decreasing team of people left desperately holding their hands up high to stop the tent collapsing completely. Which is a scary, tiring, heartbreaking job! But one that it is very hard to stop doing. No one will change or move a muscle in fear that the whole thing will collapse. The idea of those of us remaining gathering in just one tent is not to be contemplated. So the plan seems to be for everyone to keep going until they can’t keep going. And who knows (and in some cases who cares) what then?

I thought that what these tents needed was a better tent pole. A gospel pole. I thought this pole would be tolerated, perhaps even welcomed by some. But it has largely been rejected. It has been sidelined to the bits that ‘don’t matter’ (small groups, evangelism, school’s work…”because in 300 years time our small groups will have nothing to show for them, unlike the building which will still be standing”) Even there in the corner of visible church life the gospel is unwelcome to those who control the frame of the tent. Key holder-uppers have abandoned their post to get away from its offensive presence and those who remain are even more antagonistic, even more committed to their ever decreasing pole of religion.

And so we have a very saggy visible church!

And who gets the blame? That dangerous gospel pole and those dreadful people who insisted on trying to strengthen the church with it.

So what shall I do? Pray and love and trust. Repent and serve faithfully, hand over each betrayal, each thwarted opportunity, and of course if all else fails – just smile and wave!

Dear God, I can’t imagine what sadness our church must bring you. It is not a pretty picture – and I’m not talking about the lack of numbers, and money, but the lack of love and unity. I’m sorry for my part in its ugliness. For my impatience and lack of love, for my arrogance and for my lack of trust and prayer. I’ve been sighing over this in despair rather than breathing in your strength and breathing out my need to fix it all. I have been testing you in my heart by not trusting you in my heart. I have been cross and unloving and ill at ease. I have been panicking rather than praying, accusing rather than loving. May there always be a light in my eyes and a smile on my lips because of you! Help me Lord. In Jesus’ name, Amen.

Hello! Welcome to Supper's NOT in the slow cooker.

As you know, life is rarely a tidy series of 'blog moments', but rather a mishmash of messy, everyday and yet extraordinary ones.

This blog is NOT a gallery of airbrushed studio portraits displaying a godly woman and her amazing family, but rather a collection of clumsy, finger on the lens, snapshots of normal life and the musings it precipitates.

My prayer is that God will use this blog to focus me, and any who care to join me, on his flawless grace and perfect purposes as we muddle through the mishmash together.

So whether your supper is quietly under control in the slow cooker or all over the kitchen floor, grab a cup of tea, pull up a (preferably clean) chair and read on. Jo